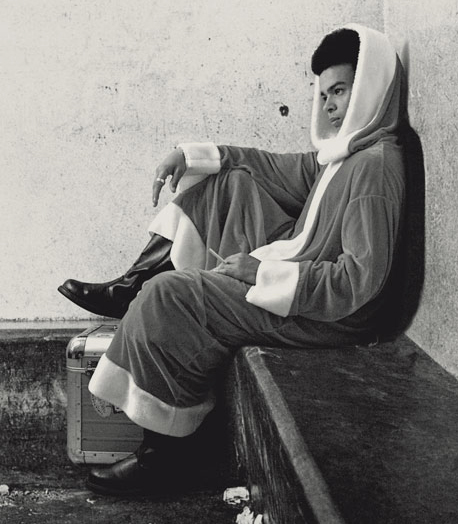 So by now you’ve bought all your Christmas presents and wrapped them. You’ve lost the scissors and screamed at a roll of Sellotape. Now all that’s left, is to enjoy the big day with a bottle of sherry and a stupid paper hat, whilst you watch people tread crisps into the carpet.

So, here’s the final ten in the best list of alternative Christmas songs.

Yes That’s right, even Santa gets presents, and this time it’s a brand new (man) bag and who better to describe it to us than Gary Walker in this 1965 (should be) classic.

On 7th December 2010, Nemone asked her BBC 6 Music listeners to vote on a Christmas song for Smerins Anti-Social Club to record. In less than a week the band had arranged, recorded and produced a ska-influenced version of Walking In The Air, Howard Blake’s composition made famous by The Snowman animation of 1982. Here is a good example of Ska’s ability to take a song and get it to jump… A great version of a moving original.

Here is a real christmas gem. The lyrics are suggestive and funny – like the guy who penned the tune. A radio DJ from Baltimore U.S.

Born in 1938, Baltimore native Paul Johnson began working as a disc jockey at the new Albert Ballroom. and He was influenced by the flamboyant style of another local deejay, Kelson “Chop Chop” Fisher.

Standing like a general before a battle, Fat Daddy stood before a studio console where his show took to the airwaves, somehow arising out of an organized chaos of records, commercials and his endless patter.

In 1971, Fat Daddy left Baltimore to do national promotions for record companies, working for Motown, Atlantic, and Capitol Records. He was 40 when he died in Los Angeles in 1978. Esquire, Cashbox, and Billboard have acclaimed him as one of the top five R&B disc jockeys in America, while Record World magazine called him simply the No. 1 soul man in the nation.

by the way – he probably did load up on one or two turkey dinners – A 300lb real life ‘fat daddy’.

This deeply funky Christmas 45 is an early production by the legendary Kwadwo Donkoh, known to many as the producer of such groups as the Uhuru Dance Band. This record is one of the greatest Christmas offerings from the heyday of the Ghanian music scene.

It’s Kutis Blow – he’s got the breaks… and this song has got the lines..

“he’s a roly, He’s a poly
and I say Holy moly
gotta lotta whiskers on your chinny cin chin”

The best Christmas rap ever? … Dam right it is!  This is some Christmas rapping that lasts longer than the presents.

Binky Griptite is a songwriter, producer, and vocalist who has been a key figure in Soul revival and  performed with Amy Winehouse. This record is a slow groover, nice and sweet, delivering some yule tide goodies to all the Funk and Soul kiddies. If there is such a thing as a Stone Soul Christmas, I’m getting on the sleigh.

In The New Testament, Jesus is referred to as ‘King of the Jews’ But The King of everything else was without doubt Elvis. Here is an early recording of Elvis making Christmas sexy.

This song has been Jazzing up Christmas since 1950, and long may it continue too.

Miles Davis had the midas touch of cool… Everything turned cool from contact with this jazz legend and Christmas is no exception. A cool Jazz classic.

Baby it’s cold outside is a Christmas song originally written by Frank Loesser  in 1944 and premiered the song with his wife, Lynn Garland, at their Navarro Hotel housewarming party, and performed it toward the end of the evening, signifying to guests that it was nearly time to end the party. Lynn considered it “their song” and was furious when Loesser sold the song to MGM.

Since then it has been covered countless times by countless artists, but the one version that stands head and shoulders above all the others is the beautifully warm and snug version by Ray Charles and Betty Carter as a duet.

The pair’s 1961 recording of Baby it’s cold outside on the album topped the R &B Charts. A 1988 re-issue included three bonus tracks and the 1998 re-issue combined, the original Ray Charles and Betty Carter.

What can we say?.. It’s beautiful, it’s playful and it feels just right. If you Save this to play at Christmas – It won’t matter how cold it is outside because it’ll be beautifully warm inside.