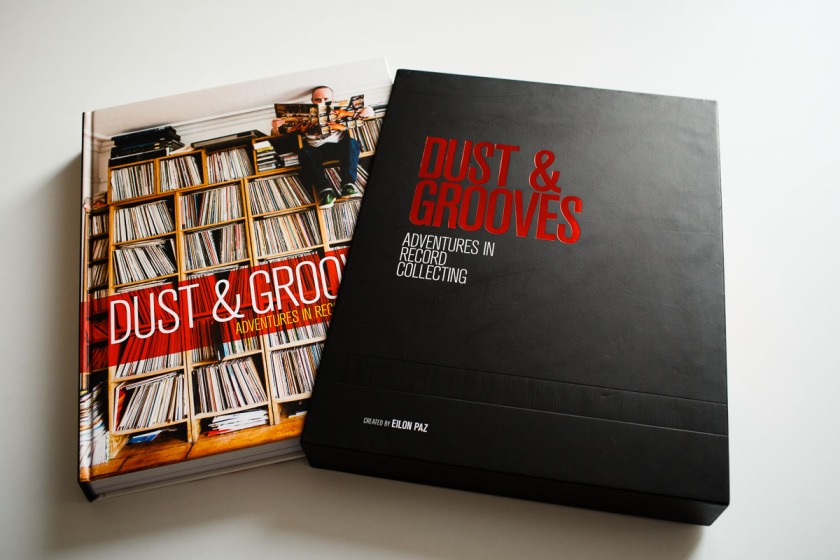 This is the slipcase version of the second and revised edition of Dust & Grooves: Adventures in Record Collecting. The slipcase cover features blind de-boss and red foil stamping. The second edition includes 20 extra pages including a new and exclusive full interview with Questlove as well as with Gilles Peterson, Kieran Hebden (Four Tet), The Gaslamp Killer, Egon and more.

Eilon Paz’s 436-page coffee-table book illuminates over 130 vinyl connoisseurs and their collections in the most intimate of environments – their record rooms. With a foreword by the RZA, compelling photographic essays are paired with in-depth interviews to illustrate what motivates record collectors to keep digging.

Readers get an up close and personal look at a variety of well-known vinyl champions as well as a glimpse into the collections of world-renowned and lesser-known DJs, producers, record dealers, and everyday enthusiasts. The framed by captions and select quotes, while the second consists of 12 full length interviews that delve deeper into collectors’ personal histories and vinyl troves.

It all started out several years ago as nothing more than a way for photographer Paz to engage in a personal project in his free time. Adrift in Brooklyn after emigrating from Israel, Paz – a record collector on the side – thought it might be fun to start taking photos of people whose record collections were both larger and weirder than his own. These portraits turned into the Dust & Grooves website, which quickly developed a global following that grew every time a new portrait was added to the mix. People all over the world seemed to dig not only the beauty of Eilon’s photos, but the interviews with the collectors – a motley, if generally charming, crew of non-violent obsessives who turned out to be at least as intriguing as the records they collected.

Unearthing the very soul of the vinyl community, his book will appeal to a broad spectrum of readers, from die-hard record enthusiasts to fans of pop culture, sharp photography, and music history.

Eilon Paz has shot for Israel’s top cultural publications and is a regular contributor for the US based food/travel magazine, Saveur, and his work appeared in worldwide publications such as Wax Poetics, Monocle, Conde Nast Traveler, Delta Airlines’ Sky magazine, and the French music magazine Vibrations.