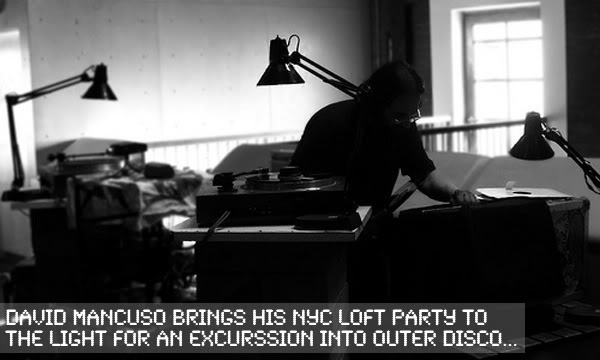 Mancuso’s legacy to dance music goes deep. He was there at the very roots of New York Disco culture, dating way way back to ‘Love Saves The Day’, his inaugural party, held at his home, a loft space in NY’s NoHo district, on Valentine’s Day in 1970.

Mancuso structured the party into three stages or, to use the term from ‘The Tibetan Book Of The Dead’, three Bardos (Leary had applied this to his LSD sessions): “The first Bardo would be very smooth, perfect, calm. The second Bardo would be like a circus. And the third Bardo was about re-entry, so people would go back into the outside world relatively smoothly”, he explains in ‘Love Saves The Day’.

David Mancuso’s London Loft party, ‘Journey Through The Light’, celebrates its 10th anniversary on June 23rd. Held Upstairs @ The Light in Shoreditch, it’s a party like no other, underpinned by a high-end audiophile sound system that has to be heard to be believed. Although its originator, now approaching his 70’s, hasn’t been able to make it in person during recent times, the party continues in his absence, Colleen ‘Cosmo’ Murphy his chosen stand in (he hopes to return for future dates though).